The NGO TexLabs on the island of Texel (Netherlands) started as an idea of Pepijn Lijklema. After finishing his MSc Thesis in 2008 at the Delft University of Technology, on the design of a smart, sustainable public light system on the island, Pepijn started a one-person consultancy firm on the island. During a number of years, he helped to successfully implement the new system, as the leading smart public light system in the Netherlands. Gradually, he built such an interesting -independent, trustful and balancing- position on the island that step-by-step the stakeholders, with the municipality of Texel as a main client, started  to request his input and that of follow-up students -and staff- from mainland institutes for student job positions and vice versa.  With strong support from the municipality of Texel, Pepijn and a group of young islanders, recently established an NGO with the main goal of brokering between knowledge institutes from the mainland and the various island stakeholders who are searching for their knowledge.

One of the novel products TexLabs has been developing is the Round-of-Texel Energy Game. The goal of the game is to explore different scenarios for the future energy system of Texel in a creative way. The concept of the yearly, International Texel Catamaran Race around the island is chosen as framework. Only through bottom-up cooperating in the creation of sustainable energy generation as well as improving efficiencies and taking demand reduction and management into account, the players cross the finish successfully and in time.Each player represents a certain stakeholder group and has its own interests and resources to submit. However, it is not possible to reach the goal of a self-sufficient energy island, without agreements with other stakeholders. On islands, the Round-of-Texel EnergyGame is played in various sessions with inhabitants, village committees, members of local parliament, students, economic sectors (agriculture, tourism, housing, service, transport, installers etc. industry), nature organizations and -other- NGOs. 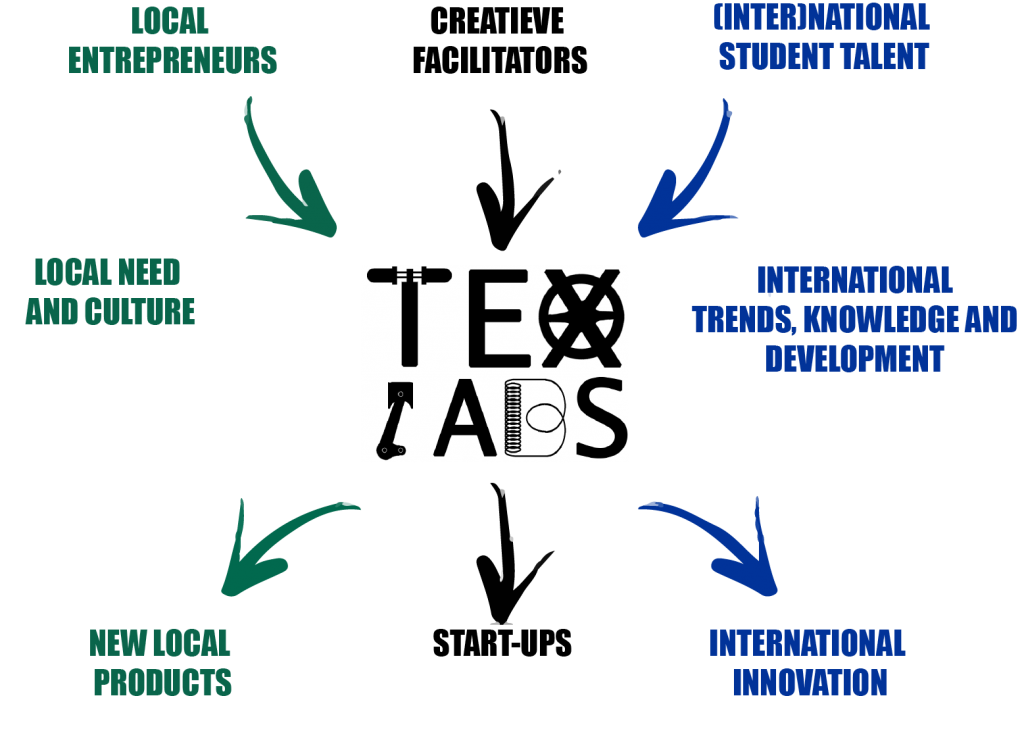 Nowadays, each year TexLabs organizes ca. 10 higher education and research institution trips to the island. These range from TU Eindhoven, to the University of Utrecht, Hanze Polytechnic Groningen, the Polytechnic of Amsterdam, that of Alkmaar, and even international visits involving more than 250 students and their staff. TexLabs is a source of inspiration for the inhabitants of Texel, not only with respect to new knowledge and knowhow and as a “creative facilitator” but also as an activity that sparks new ventures on the island by students who decide to stay – closing Pepijn’s circular loop.

Example of strategy 3A:

Municipalities or regional island authorities can support initiatives, whichbring students and their projects (thesis, graduation, PhD fieldwork,internship, special course/curriculum, etc.) to the island, to explore the islands’ problems and opportunities from a fresh perspective. Although some of the resulting ideas and proposals might be too idealistic for direct implementation, they can help to set the agenda for innovation on the island and lead to structural cooperation with mainland higher education in different disciplinary backgrounds.

Islands should profit from their uniqueposition, being perceived by students and staff as places “par excellence” to discuss and test out new ideas in isolation and on a small scale.

Local governments are in the position to strengthen the initiatives ofisland individual firms, NGOs, and sectorial organizations (agriculture, fisheries, services, tourism, recreation, transport, etc.) that are lookingfor student input from the mainland. Particularly from a municipality, a relevant own initiative in hiring students for interesting projects would be expected to set the leading example and create a “lighthouse” position.

© Islands of Innovation | All rights reserved